Central Philippines State University once again proudly waves its flag of pride and triumph as it celebrates another batch of successful board examinees this year through a virtual recognition program hosted by the CPSU Victorias Campus last December 16, 2021. 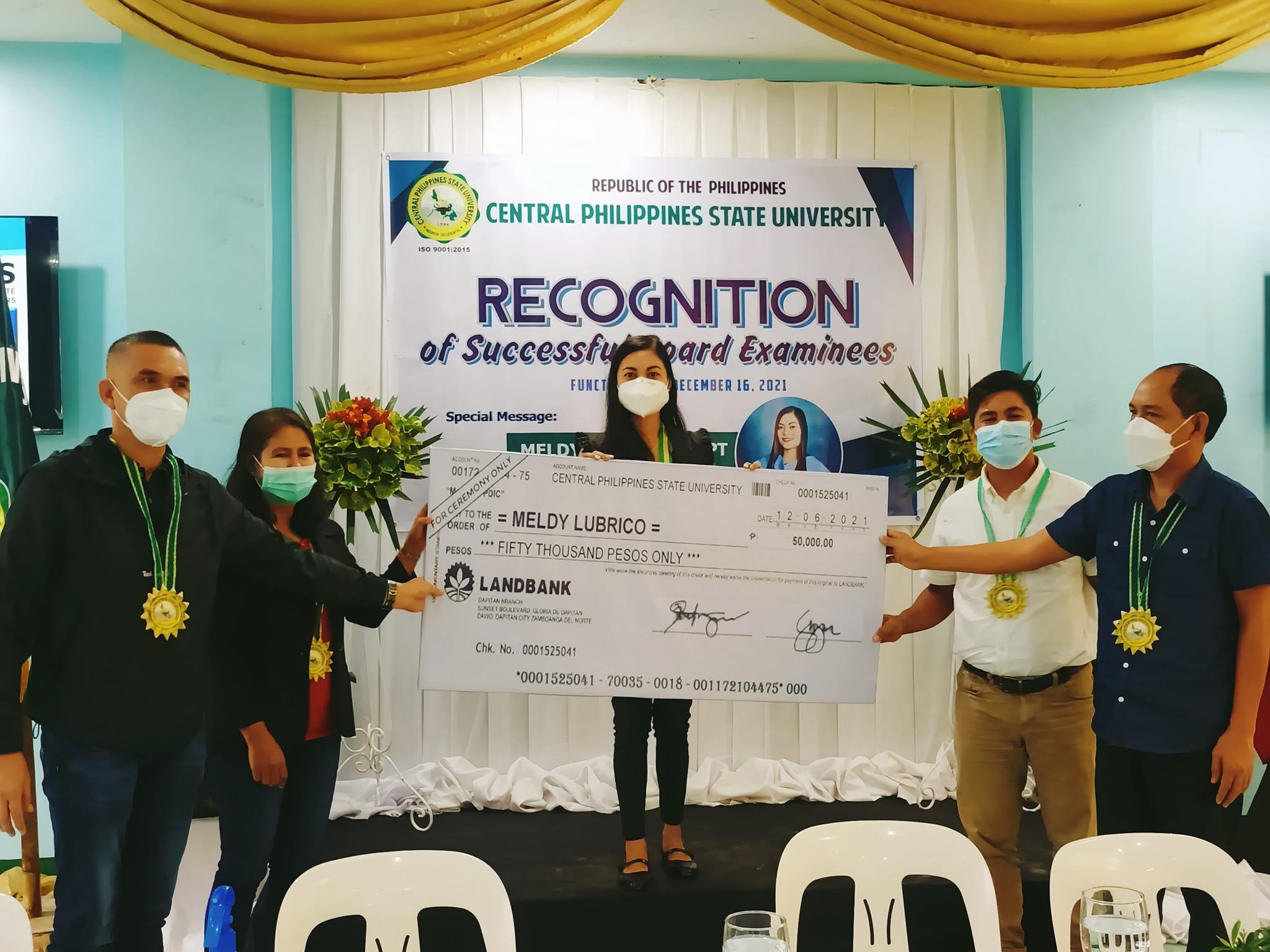 These were the board passers in all its ten (10) campuses across programs who were given recognition such as the licensure examination for Agriculturists (LEA), Chemical Technicians, Foresters, and Licensed Teachers.

One of the highlights in the said event was the awarding of the Php 50,000.00 incentive to Ms. Meldy S. Lubrico, a Bachelor in Elementary Education (BEED) student of CPSU Victorias campus who made it to the TOP 10 in the recently conducted Licensure Examination for Teachers (LET) by the Professional Regulations Commission (PRC). This is part of the support program of the University to inspire its students to strive harder in their studies.

Dr. Fernando Abello, VP for Academic affairs, congratulated all the successful takers, especially Ms. Lubrico, for garnering the 10th place in the Board for Professional Teachers, bringing prestige and honor to the entire CPSU system. He stated how this achievement embodied the vision, mission, goals and objectives of the University anchored on the development plan of the institution in delivering quality education to its students.

Ms. Lubrico expressed her gratefulness for the four years of knowledge, support, and hope given to her through the free tertiary education of CPSU, especially to the administration, to her campus administrator and to all her instructors in CPSU Victorias for honing and preparing her for this moment.

Hoisting the banner of triumph for this year’s topnotch-taker, Sir Noel Fordente, Victorias campus coordinator, expressed how this momentous event had been a blessing especially in giving honor to the entire University system.

“This proves that the formula of CPSU is tested and working. Many may have doubted the credibility of our school in producing quality graduates, but today the 100% passing rate not only in Victorias campus, but also in Hinigaran, Hinobaan, Main, and other campuses had proven the integrity of our mission and vision, and we are proud to say that we excel,” he added.

Sir Fordente credited this success to the collaborative efforts of the LGU of Victorias, as well as to other local governments, the administration, its teaching force and the whole CPSU system, for the strong support in the educational system of the University.

Dr. Evangeline Alo, the Victorias City Planning and Development Officer, who spoke on behalf of City Mayor Hon. Francis Frederick Palanca, stated how their LGU had been serious in its advocacy and commitment to strengthen education in their locality through the strong support they give to CPSU and its students. Another major project they entrust to the University is the construction of the state-of-the-art Veterinary Hospital which is expected to open in 2022. With this, the campus is also anticipated to offer Veterinary Medicine. She further congratulated the CPSU Victorias faculty and staff for the years and years of dedicated service and hard work to produce a topnotcher, including all its campuses for their commendable board exam passing rates.

Quality Assurance director, Dr. Grenny Jungco, stated how the University functions based on its four (4) core mandates in instruction, research, extension and production, and how that excelling in all these thrusts is considered a huge feat.

“To produce quality graduates is not an accident, and to produce a topnotcher is not an accident, rather, it is the fruit of the collaborative efforts of the faculty, staff, students, administration and the LGU. If we pray together, and work together, then we achieve together for the attainment of the institution’s vision, mission and goals,” Dr. Jungco explained.

“The Office is privileged and grateful to provide review classes to the graduates, and I would like to thank everybody, to the program heads, for tracing all their passers. This activity shows how the University supports your success after you exit the portals of your alma mater. We look forward to the success in your employment in your respective careers,” Dr. Malacapay stated.