Being a gender-fair campus, Central Philippines State University  through its Gender and Development (GAD) unit and the Office of the Student Services and Affairs (OSSA) spearheaded a 1-day virtual LGBT webinar with the theme, "Promoting Well-Being of CPSU Academic Community with Pride" last June 26, 2021. 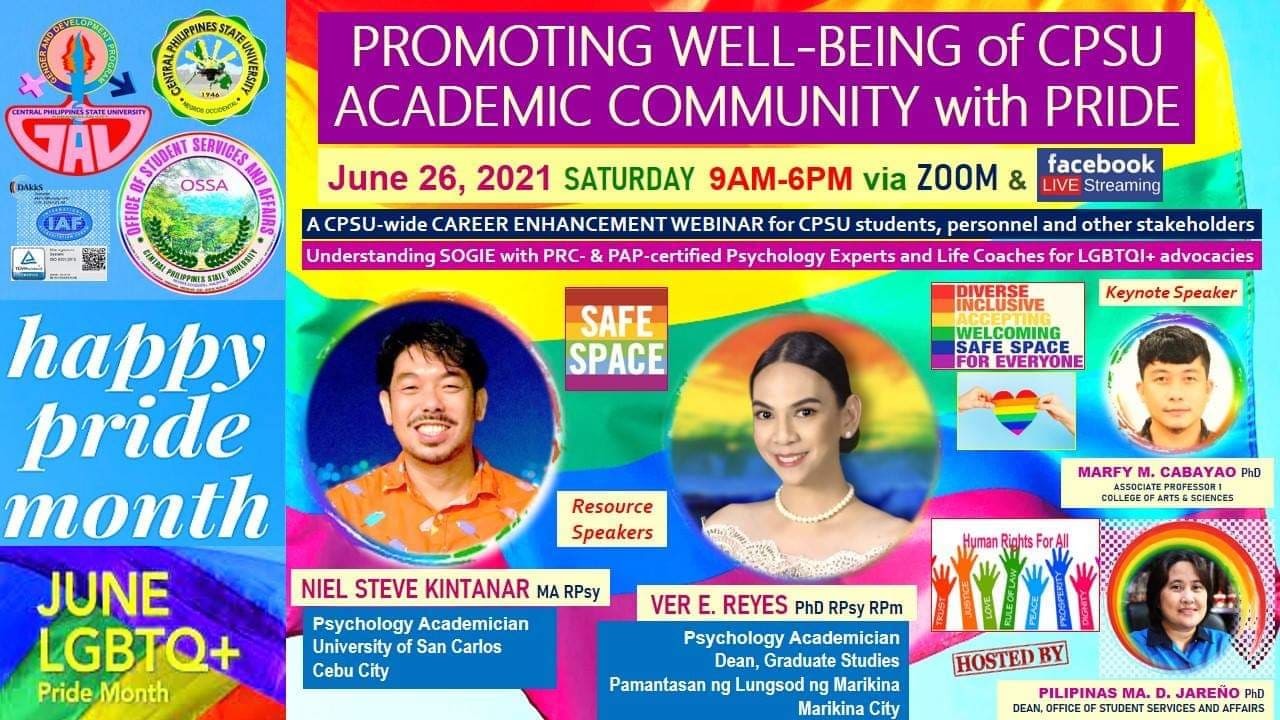 Graced by esteemed speakers which are PRC and PAP-certified psychology experts and life coaches for LGBTQI+ advocacies, the said CPSU-wide career enhancement webinar aimed to provide awareness on SOGIE as part of the University’s goal of providing gender-sensitive products and services to its clientele.

Dr. Pilipinas Ma. D. Jareño, OSSA dean, gave the opening salvo with emphasis on how the University promotes and supports GAD programs for the welfare of both the students and personnel.

A video presentation followed right after that further illumined the participants about the origin and the amazing story behind the creation of the rainbow flag that colorfully represents the LGBT community.

One of the resource speakers, Sir Niel Steve M. Kintanar, a registered psychologist from University of San Carlos, Cebu City, gave a topic on Development and Well-being for all Regardless of SOGIESC. He commenced with an activity that gave emphasis on participants’ preference of nouns based on how they would wanted to  be addressed.

"Psychology now focuses on the promotion of well-being of all people regardless of their gender, gender identity, and sexual orientation,” Sir Niel explained.

He likewise discussed the various challenges faced by its members such as being hindered from their capacity "to be"  which refers to the "right or opportunity," and their capacity "to do"  which means the "ability or power to achieve the ‘be’". He also added the stigma that the LGBT community experienced in their environment.

During the afternoon session, Dr. Ver A. Reyes, a license Psychologist and Psychometrician and the  Dean of Graduate Studies from Pamantasan ng Lungsod ng Marikina, Marikina City continued the webinar with her topic on SOGIE 101.

“Being part of the LGBT is not the big problem, but the stigma that goes with it which negatively impacts the person’s well-being,” Dr. Reyes stated.

She particularly tacked on the three I's of struggle of the LGBT people which are the Identify, Interaction and Intersectionality. She also expounded on the intricacies of the LGBT people by presenting the Genderbread Person focusing on Gender Identity, Gender Expression, Biological Sex and Sexual Orientation that could help on how individuals identify themselves.

Towards the end of the event, Sir Noel Dayono, the University GAD focal person, expounded on the importance of the said activity to provide equal opportunities to all members of the CPSU community without fear of discrimination and bias treatment since all are respected as humans with natural born rights. He finally gave his message of gratefulness to the administration and to all the participants in supporting all of the GAD programs.

In its entirety, the webinar was conducted not just to inform the participants about LGBT rights, but to empower and inspire all LGBT advocates. Participants of the activity included the undergraduate and graduate school students in the main and satellite campuses, personnel and other stakeholders.